Great earthquakes in the subduction zones generated large tsunamis that devastated coastal areas. Huge tsunamis such as the 2004 Indian Ocean or the 2011 Tohoku tsunamis caused fatal damages in areas more than 1 km away from the coastlines. Unfortunately, existing tsunami early warning systems in the world do not have the capability to forecast tsunami inundation in the near field.

We developed a methodology for Near-field Tsunami Inundation Forecasting (NearTIF) that can produce high-resolution tsunami inundation forecast maps in around 3 minutes after the source of the tsunami has been determined (Gusman et al., 2014). This algorithm requires database of pre-computed tsunami waveforms and tsunami inundations.

The algorithm has been tested in a retrospective forecast of the 2011 Tohoku tsunami along the Sanriku Coast, Japan. Tsunami inundation maps were forecasted with earthquake source model that was estimated from the W phase of seismic data. We found that the resulting tsunami inundations were similar to the observed tsunami run-up heights.

We carried out tsunami evacuation drill in Kushiro city Hokkaido that used results from our algorithm to evaluate the effectiveness of tsunami inundation forecast maps.

When an earthquake happens, tsunami waveforms at near-shore points can be simulated on low-resolution grid by solving the linear shallow water equations. This kind of simulation does not take long time and can be done using regular computer. A scenario in the database than produced tsunami waveform that is similar to the simulated one can be found by RMS analysis. Finally the corresponding tsunami inundation map from that best-fit scenario is selected as tsunami inundation forecast map. This process takes only approximately 3 minutes on a regular computer. 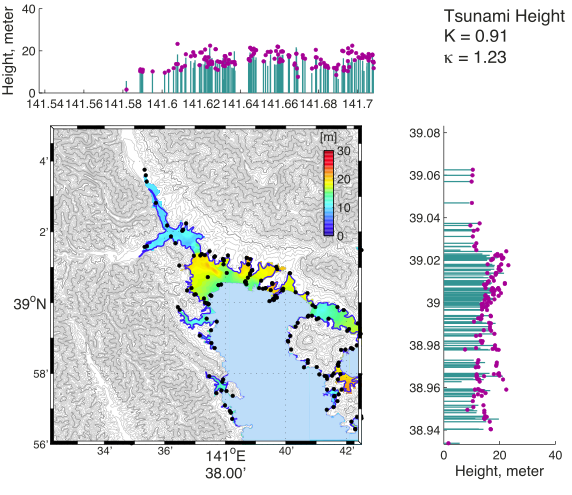 From historical and pre-historical tsunamigenic earthquake studies (Hatori, 1984; Hirata et al., 2003; Satake et al., 2005; Tanioka et al., 2007; Ioki, 2013), Kushiro city has been identified as a tsunami prone area. Kushiro city office has provided to the public a tsunami hazard map that can increase the effectiveness of evacuation plans for the community.

We evaluated the effectiveness of the NearTIF algorithm in the real world by carrying out a tsunami evacuation in Kushiro city, Hokkaido, Japan. The participants found that the use of the tsunami inundation forecast map was effective to make a better decision with high confidence during the tsunami evacuation process.
The NearTIF algorithm is recommended to be use as part of the reconstruction policy by local authorities to improve the evacuation efficiency particularly in tsunami prone areas. We recommend the use of the NearTIF method in developing future tsunami forecasting systems with a capability of providing tsunami inundation forecast maps for locations near the tsunami source area.

We use a two-dimensional tsunami sediment transport model to study the source of the 2004 earthquake. To test the model behavior, numerical experiment on sediment deposition and erosion is performed using various hypothetical parameters of tsunami wavelength, topographic slope, and sediment supply. The numerical experiment results show that erosion and deposition are strongly influenced by the tsunami wavelength and the topographic slope. The model is used to compute the spatial distribution of tsunami deposit thickness produced by the 2004 Indian Ocean over an actual elevation datasets in the coastal area of Lhok Nga, Banda Aceh, Indonesia. The model produced simulated tsunami deposits that have similar thicknesses with the measured data along a surveyed transect. Then we estimate a simple fault model for the southern portion of the 2004 earthquake using tsunami sediment transport simulations. The simulated tsunami run-up from the fault model is very close to the measured run-up. This result indicates that a source process of a large earthquake that generates a large tsunami has a potential to be estimated using sediment deposit distribution data.

Several large earthquakes have recently occurred along the Sumatra-Java subduction zone, the 2004 great Sumatra-Andaman earthquake, the 2005 great Nias earthquake, the 2006 West Java tsunami earth- quake, the 2007 great Bengkulu earthquake, and the 2010 Mentawai tsunami earthquakes. Serious tsunami disasters were caused by the great underthrust earthquakes which ruptured the plate interface near the trench such as the 2004 Sumatra-Andaman, 2006 West Java, 2010 Mentawai earthquakes. At Palabuhanratu, maximum tsunami height distribution and inundation areas were computed from expected fault models located near the Java trench. The results shows that the most populated areas of Palabuhanratu would be severely damaged by the expected tsunami caused by the fault model of Mw 8.5. After discussing tsunami disaster mitigation measures with the local government, the result of tsunami inundation area in this study were used to decide tsunami evacuation areas and evacuation routes. The local government also installed tsunami evacuation sign boards near the coast.

The 2006 western Java tsunami deposited a discontinuous sheet of sand up to 20 cm thick, flooded coastal southern Java to a depth of at least 8 m and inundated up to 1 km inland. In most places the primarily heavy mineral sand sheet is normally graded, and in some it contains complex internal stratigraphy. Structures within the sand sheet probably record the passage of up to two individual waves, a point noted in eyewitness accounts. We studied the 2006 tsunami deposits in detail along a flow parallel transect about 750 m long, 15 km east of Cilacap. The tsunami deposit first becomes discernable from the underlying sediment 70 m from the shoreline. From 75 to 300 m inland the deposit has been laid down in rice paddies, and maintains a thickness of 10–20 cm. Landward of 300 m the deposit thins dramatically, reaching 1 mm by 450 m inland. From 450 m to the edge of deposition (around 700 m inland) the deposit remains <1 mm thick. Deposition generally attended inundation—along the transect, the tsunami deposited sand to within about 40 m of the inundation limit. The thicker part of the deposit contains primarily sand indistinguishable from that found on the beach 3 weeks after the event, but after about 450 m (and roughly coinciding with the decrease in thickness) the tsunami sediment shifts to become more like the underlying paddy soil than the beach sand. Grain sizes within the deposit tend to fine upward and landward, although overall upward fining takes place in two discrete pulses, with an initial section of inverse grading followed by a section of normal grading. The two inversely graded sections are also density graded, with denser grains at the base, and less dense grains at the top. The two normally graded sections show no trends in density. The inversely graded sections show high density sediment to the base and become less dense upward and represents traction carpet flows at the base of the tsunami. These are suggestive of high shear rates in the flow. Because of the grain sorting in the traction carpet, the landward-fining trends usually seen in tsunami deposits are masked, although lateral changes of mean sediment grain size along the transect do show overall landward fining, with more variation as the deposit tapers off. The deposit is also thicker in the more seaward portions than would be produced by tsunamis lacking traction carpets.